Anahit Hayrapetyan, an Armenian photographer, makes sure that wherever she is in the world she Skypes daily with her grandmother. It’s her way of staying connected with their ancestral village, Khtsaberd, nestled in the mountains of the disputed territory of Nagorno-Karabakh in the South Caucasus. They talk about everything from how much milk the family cow gave that day to tales of family members who lived in the same village centuries before.

“If you go there, you know who I am and why I’m like this,” Ms. Hayrapetyan, 34, said. “It’s not a beautiful resort. It’s a small village of 40 families with old houses too close to each other. The church burned down and was never rebuilt. But I look like me in that place.” 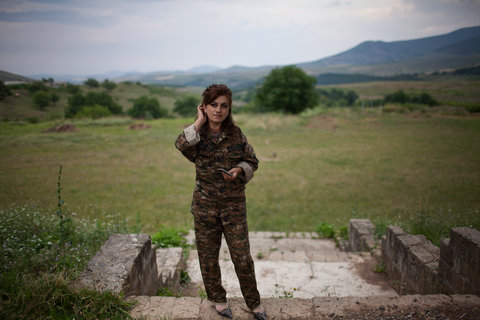 Since then, Nagorno-Karabakh has been governed independently with significant support from Armenia. Fighting over the territory broke out again last month between Azerbaijan and Armenia, and 20 people were killed in a few days of battles. There have been minor skirmishes since.

Ms. Hayrapetyan was born near Khtsaberd but grew up mostly in Abovyan, Armenia. She spent summers and school vacations at her grandmother’s house, listening to her stories, wandering the fields and milking the sheep. It was an idyllic time.

She had been in the village during the 1988 war, which included massacres on both sides and left about a million people, mostly Azeris, displaced. Many houses were destroyed and seven of Khtsaberd’s young men were killed. The villagers were consumed by grief.

“For five years nobody played music, even during a wedding,” Ms. Hayrapetyan said. “Every Saturday, all of the village would go to the graveyard and all you could hear was the sound of women wailing.” 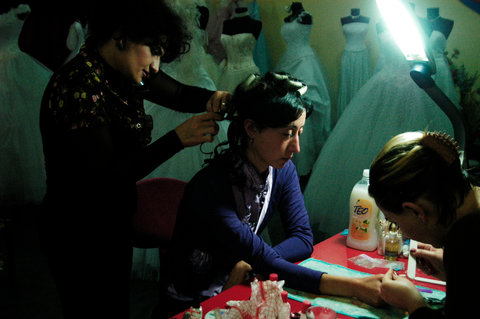 Ms. Hayrapetyan started photographing Khtsaberd and a few surrounding villages in 2006 while studying at a World Press Photo workshop in Yerevan, the Armenian capital. Although she knew almost all of her subjects, it was at times difficult for her.

“There was so much loss and pain in every family’s story,” she said.

A decade later she is still photographing and collecting stories there.

Ms. Hayrapetyan helped start 4plus, a collective of Armenian women, along with Anush Babajanyan and Nazik Armenakyan. They hold exhibits, lectures and workshops to develop documentary photography. Her photographs of domestic violence in Armenia were published on Lens last month.

She splits her time between Yerevan and Frankfurt, Germany, where her husband works. Her three children are with her most everywhere she goes.

She made an open-air gallery in Khtsaberd to show her images to the villagers. It was her first solo exhibition, and people enjoyed seeing photographs of themselves. Unfortunately, the show ended early. That evening some cows wandered over and started to eat the photographs.

If she had her choice, Ms Hayrapetyan said she would live in Khtsaberd, where she knows the names and stories of relatives going back seven generations.

For example, her grandmother’s grandfather Hambardzum was widely known as the biggest and strongest man in Khtsaberd, although someone claimed another man from a neighboring village was even tougher. Once, they were both cutting wood in the forest and ran into each other. A fight ensued.

“Hambardzum won and cut the beard of the smaller man,” Ms. Hayrapetyan said. “But then he had to stay inside his home for a while to avoid the other man.”