Relief, delight and pride were the overriding emotions in the Borussia Dortmund camp after Kevin Grosskreutz’s 87th-minute goal sealed a 2-1 victory at Olympique de Marseille and a spot in the last 16 as UEFA Champions League Group F winners.

“Perhaps we pulled off the impossible,” commented playmaker Henrikh Mkhitaryan after last season’s runners-up moved ahead of both Arsenal FC and SSC Napoli with that late winner, having been in third with the Italian side beating the Gunners. The point-less hosts took heart from a committed performance just days after José Anigo stepped in to replace departed coach Élie Baup, according to UEFA’s official.

”We’re very proud. We played a great game and, although we didn’t score all our chances, we managed to score a second goal. That’s what matters because during the game we heard that Napoli were winning 1-0, so we gave all we had on the pitch to get over the line. We could have ended up first or third in the group, but we did our job well and took first place, the Armenian midfielder said.

“We knew Marseille wouldn’t just play for a draw because they didn’t want to finish with zero points in a home game. We expected a tough match and for them to try to win in front of their fans,” he added.

“It’s always difficult to play against a team that’s defending when they have ten men, but Marseille still attacked on the break and had chances to score. We were ready for that, and we were able to find spaces at the end of the second half to get our second goal,” Mkhitaryan said.

“After the winning goal I remember feeling happy because there were just four minutes to go. I’m very proud we got it because throughout the group stage we’ve had problems, with red cards, injuries and so on. In spite of that, we still had players who could come in and play a great game,” Henrikh Mkhitaryan said. 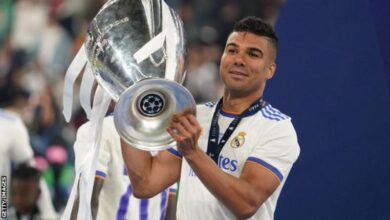