Prime Minister Nikol Pashinyan took part in the opening ceremony of the first Global Armenian Summit at the National Gallery of Armenia together with his wife Anna Hakobyan.

President of Artsakh Arayik Harutyunyan, President of the National Assembly Alen Simonyan, Chief of Staff of the Prime Minister Arayik Harutyunyan, Secretary of the Security Council Armen Grigoryan, High Commissioner of Diaspora Affairs Zareh Sinanyan, many Diaspora-Armenian figures representing various fields and other officials were also present at the event.

Prime Minister Pashinyan made a speech, in which he particularly stated:

I salute the holding of the first Global Armenian Summit and welcome all its participants. In the context of the Armenia-Diaspora dialogue, this gathering is rightly expected and relevant, especially these days, when it is obvious to everyone that Armenia-Diaspora relations are undergoing profound substantive, socio-psychological, and organizational changes, regardless of our will.

These changes are taking place not because someone wants it, but because global processes are forcing such changes. These changes have nothing to do with the revolution that took place in Armenia in 2018, nor the tragedy of the 44-day war in 2020. Both the revolution and the war were an opportunity for us to record the obvious, and the obvious thing is that time has an inevitable effect on the essence and content of the Armenian Diaspora.

What does Diaspora Armenian mean in an era when a person can spend the 7 days of the week in 6 different parts of the world? What does it mean to be a Diaspora Armenian in a situation where you can send and receive letters, photos and videos from anywhere in the world within seconds, establish video contact with anyone 24 hours a day? What does community life mean in a situation where Armenian literature, the Armenian press, books are available through the Internet at any time and in any place, and any Armenian can talk to any other Armenian at any time, generate, share, spread any idea, given that Armenia is on the list of the world’s leading countries in terms of internet access and freedom.

The answers to these questions are extremely important for all of us. And we believe that the answers to these questions will change a lot in the relations between the Republic of Armenia and the Diaspora. We believe in this with the conviction that Armenians around the world have great potential. And a country with such worldwide resources, such as Armenia, should not have the problems it has now. And if it has, it means that we have done and are doing a lot wrong not only in Armenia, but also in Armenia-Diaspora relations.

The biggest mistake, in my opinion, is that the Armenia-Diaspora conversation usually begins, proceeds and ends with the truths known to us, or as it is customary to say, universally approved truths. This is certainly not bad. This is even good, but it is not perfect in the sense that it does not expand our understanding of ourselves and the world. This, in turn, does not allow us to perceive and record the changes taking place in the world at a sufficient speed, that is, to grasp the opportunities and manage the challenges.

The first Global Armenian Summit is taking place in a situation where many ideas and dreams about the world, the region, even ourselves have been shaken, sometimes even collapsed. Our proposal and idea is not to remain under those ruins, but to try to find new opportunities, to try to make the Republic of Armenia a platform for the formation and development of new ideas, new dreams, new approaches, with an independent, sovereign, safe, free, developed and democratic Armenia as the core, because any Armenian anywhere in the globalized world can have anything: welfare, job, money, family. And there is only one exception, and that one thing is the Republic of Armenia, the pride and happiness of being a citizen of which is enjoyed by the majority of people present in this hall.

The first Global Armenian Summit aims to become a platform and a meeting place for people who want and are ready to make the state interest of the Republic of Armenia a pan-Armenian agenda, have their contribution to the advancement of that interest, to support the institutional accomplishment and strategic development of the statehood as a modern state able to meet the challenges of the 21st century.

Thank you all for your participation and willingness.”

The summit will have a total of 8 panel discussions and 17 simultaneous sessions, discussing issues starting from Armenia’s security to the protection of Armenian interests in the world, from repatriation to education, healthcare and agriculture, from communities in crisis situations to Diaspora youth. The summit has 600 participants from 50 countries. More than 100 speakers from 15 countries will deliver speeches. 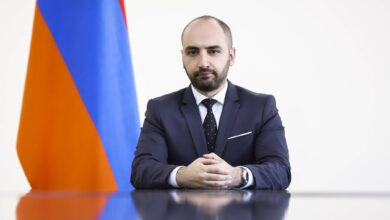