On the occasion of the Centennial of the Armenian Genocide (1915-2015), the Board of Trustees of Ararat Home of Los Angeles, a home for Armenian elderly, is organizing a commemoration and “Celebration of Life” to honor the Home’s centenarian residents as well as the survivors of the Genocide. Two of those residents, Mrs. Rose Garjian and Mrs. Yevnige Salibian, are survivors of the Genocide and were honored by the USC Shoah Foundation in 2012 and 2014, respectively, Massis Post reports. 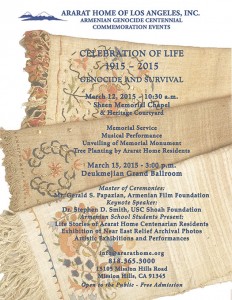 Two events are planned for this commemoration. The first will be a memorial service to pay tribute to the victims of the Armenian Genocide of 1915 to 1923. It will be held on Thursday, March 12, 2015, at 10:30 a.m., in Sheen Memorial Chapel on the Ararat Home Mission Hills campus. The program will include: a requiem service to be officiated by the Diocese and Prelacy of the Armenian Apostolic Church, the Armenian Catholic Church and the Armenian Evangelical Union in the greater Los Angeles area; a musical performance by heavenly chants flute and harp duo, Salpy and Sossy Kerkonian; the unveiling of a memorial monument; and, a tree planting ceremony in Heritage Courtyard by Ararat Home residents.

The second “Celebration of Life” event will reflect on the survival of the Armenian nation by highlighting the testimonies and life stories of the Home’s centenarian residents, which will be presented by the future generation of Armenians – students from Los Angeles area Armenian day schools. It will be held on Sunday, March 15, 2015, at 3:00 p.m., in Deukmejian Grand Ballroom on the Ararat Home Mission Hills campus. Mr. Gerald S. Papazian, Chairman of the Armenian Film Foundation, will serve as the Master of Ceremonies, and Dr. Stephen D. Smith, Executive Director of the USC Shoah Foundation-The Institute for Visual History and Education, will deliver the keynote address. The program will also include a film clip presentation by Emmy Award winning documentary filmmaker Bared Maronian, a performance by multi-faceted artist Dr. Vatche Mankerian as well as by tenor Raffi Kerbabian. Near East Relief archival photos not seen in public for nearly a century will be on exhibit. The program will conclude with a “Celebration of Life” dance performance by Hamazkayin Nairi Dance Group.

Board Chairman Joseph Kanimian, Esq. commended the meticulous planning and efforts of the Co-chairs of the Ararat Home Armenian Genocide Centennial Commemoration Committee, Maggie Mangassarian-Goschin and Nadya Verabian, and the participation of Committee members – Debbie Avedian, Ani Dikranian, Nora Hampar, Margarita Kechichian, Varsenik Keshishyan, Rita Noravian and Kohar Mardirossian Pelter, – who have worked diligently to immortalize the memory of the victims of the first genocide of the 20th century and to celebrate the revival and resurrection of the Armenian nation.