The Bundestag may consider an Armenian Genocide resolution this fall, but the concrete timing is yet to be confirmed, German Ambassador Extraordinary and Plenipotentiary to Armenia Matthias Kiesler told reporters today.

Ambassador Kiesler said hearings on an Armenian Genocide bill pending at the Bundestag are under way. “I cannot say, however, when the measure will be discussed and be put on a vote.”

The Ambassador participated today in the discussion of the results of the “Acting Together” initiative, a program funded by the German Federal Foreign Office, which aims at building bridges between the people of Turkey and Armenia through adult education, journalism, oral history and art.

As part of the project twenty young people and two writers from Armenia and Turkey are taking in a joint road trip from Armenia to Turkey, retracing the routes of 1915.

Next year in Turkey they will look for signs of former Armenian life and its extinction in the collective memories of peoples with different ethnic, religious and cultural backgrounds. Amng other places the participants will visit Istanbul and Haydarpasha station from where Armenian intellectuals were deported on April 24th, 1915, and Aydash, a former concentration camp near Ankara. 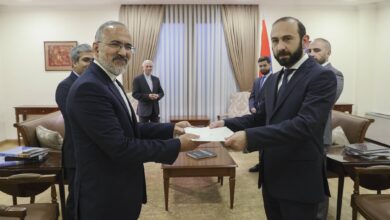