The duduk, the double-reeded Armenian oboe, has become synonymous with Djivan Gasparyan, who has played it for Stalin and Kennedy; with Sting and Lionel Richie; and now, in his mid-eighties, at the Barbican. Ten years ago, Gasparyan made a celebrated appearance in Tehran with the Persian classical musician Hossein Alizâdeh, and it was a coup for the Barbican Centre, the largest performing arts centre in Europe, to secure a repeat performance, the Financial Times writes.

“Alizâdeh won a standing ovation from the Iranian half of the audience simply for walking on. Cross-legged on a carpet with his setar, he played phrases and their own echoes, ornamenting his ornamentations until the instrument sang stories within stories, all while Pejman Hadidi tapped his fingertips on his tombak and flicked his nails as if striking a match,” the paper reads.

“It was the kind of slow trance that could have lasted for 20 minutes or three hours; it was nearly an hour before he yielded to Gasparyan, who entered to his own ovation from his own countrymen. He led a quartet of duduks, including one bass version that he had invented himself; and also including his grandson, also named Djivan. At first, Gasparyan senior played melancholy melodies over a slow drone from the others: when the bass shifted down a third, the difference felt seismic. The ratio of air to jig was about five to one, but at the end of a tune the quartet would sometimes break into a polyphonic dance. Gasparyan junior took some lead parts, with impossibly fast trills that sounded like a button accordion. At times, the quartet’s music sighed like 1930s crooners; then the melodies sheered into dissonances that sounded continents away from European music,” the article reads.

“Following Alizâdeh’s lead, the quartet played a couple of songs too many, so it was two hours into the concert before Armenians and Iranians shared a stage. Alizâdeh bulked out his band with a fiddle player and two women, one with a qanun, the other singing. The three younger duduk players joined him, first interposing solos and then (when audible) weaving around the voice’s call-and-response with Alizâdeh’s shurangiz and the qanun. “Torkaman” had yelping vocals and a deep drumbeat, while the duduks breathed clouds of unease. Gasparyan senior returned, not to play but to sing with the timbre of the duduk. A five-beat Armenian folk song gathered both halves of the audience in applause from the first note,” the article concludes. 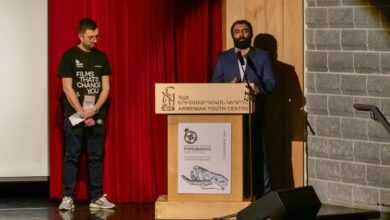