The extraordinary escape from the Armenian Genocide of Kim Kardashian’s ancestors – thanks to a ‘prophet’ who urged them to uproot to America – can be revealed today for the first time.

The Daily Mail presents images showing the reality TV star’s ethnic Armenian forebears who fled the tsarist Russian empire in the early 20th century, many of whom obeyed the advice of the sage.

Known at the time as the Kardaschoffs, in Russian style, the family made their way from their home village of Karakale in the late 19th Century to German ports. From there, they travelled to a new life in America on the passenger vessels SS Brandenberg and SS Koln.

By doing so, they escaped the triple horror of the First World War from 1914-18, the Armenian Genocide starting in 1915 – exactly a century ago this year – and the Russian Revolution in 1917. 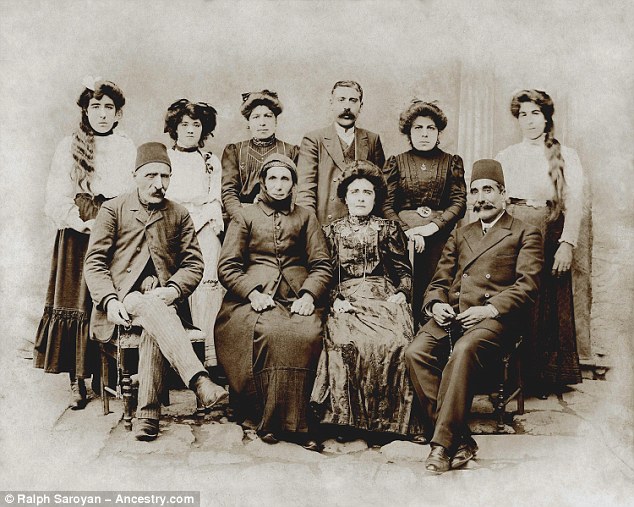 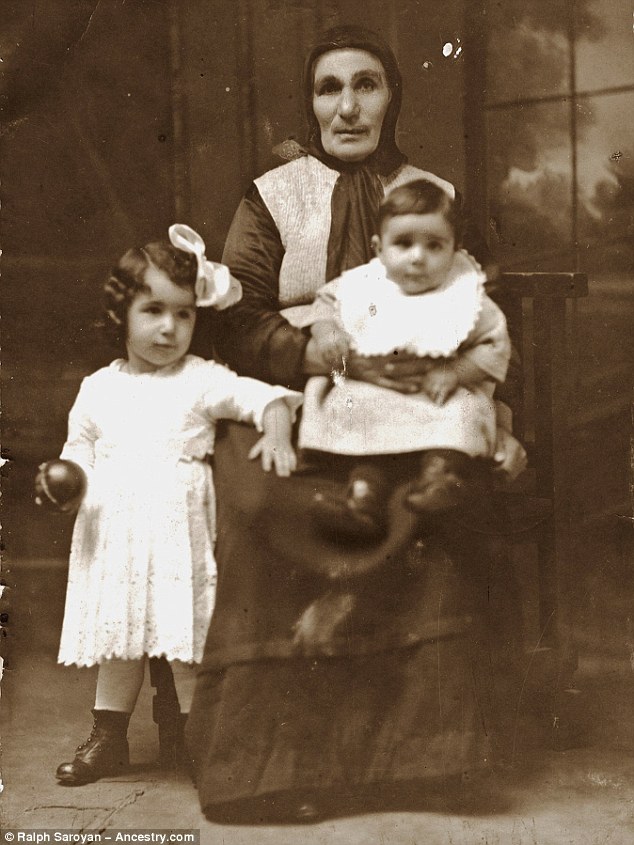 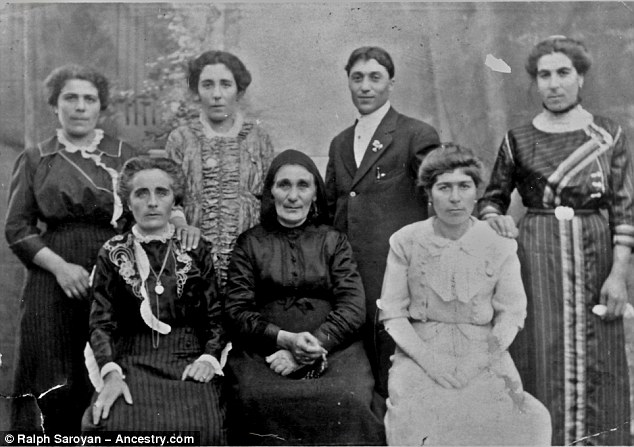 Meet the family: Luciag (centre in front row) and Hovhannes took their daughter Vartanoosh Miroyan (first on the left in back row) to America, where their legacy has thrived 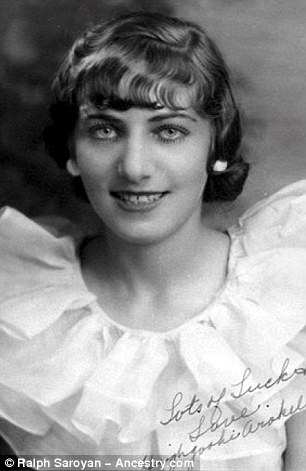 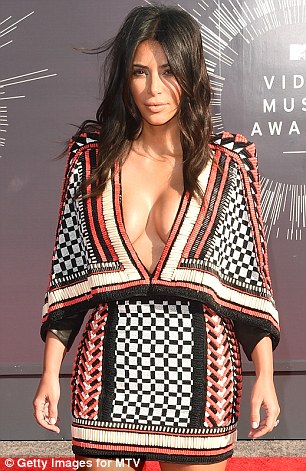 Glamorous: It is quite possible that Kim Kardashian got her star power from her ‘dynamic’ grandmother Helen (daughter of Vartanoosh) who is pictured left on her wedding day

One hundred years after the deadly holocaust decimated their ancestral home, the Kardashians have become one of the most influential families in America.

The most famous of which is Kim who has chosen this year, on the hundredth anniversary of the atrocity, to visit Armenia for the first time.

But her lavish lifestyle, the expensive houses, an army of followers who hang on her every tweet, the marriage to a musical superstar would not exist if her ancestors had ignored the warning of a child ‘prophet’.

Among those fleeing Erzurum – then in Armenia, and ruled by last Russian Tsar Nicholas II was family patriarch Hovhannes Miroyan and Kim’s great great grandfather, born in 1844. He married the doughty Luciag Chorbajian, born in 1853.

The couple wed in Erzurum, which is now in Turkey, in 1867 but escaped along with their daughter Vartanoosh Mironyan, born in 1886, in the early 20th century.

Vartanoosh’s distinctly blonde daughter Haigoohi Arakelian – known as Helen, born in America in 1917, the year the Bolshevik Revolution rocked the Russian Empire – was Kim’s grandmother, who later married into the Kardashian clan.

The glamorous and ‘dynamic’ Helen wed Arthur who ran the largest meat-packing business in southern California. 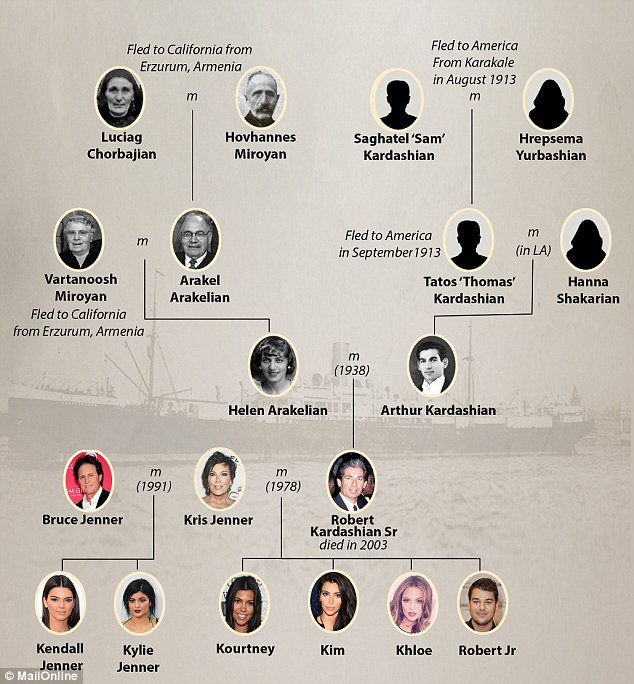 Ties that bind: The Kardashian family tree that traces back to two Molokan Armenian families 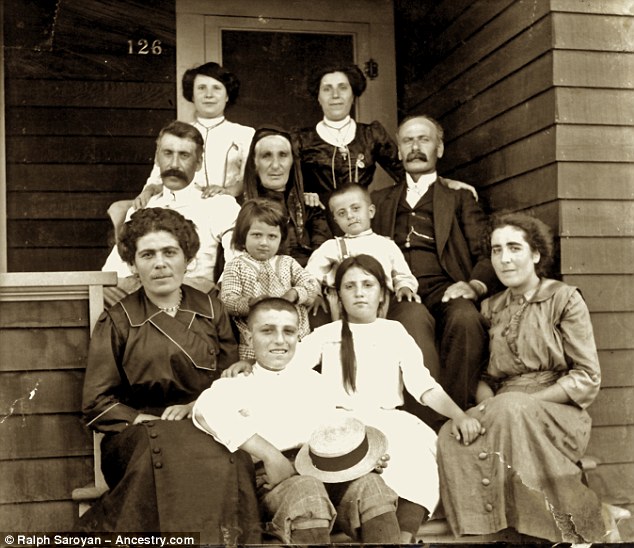 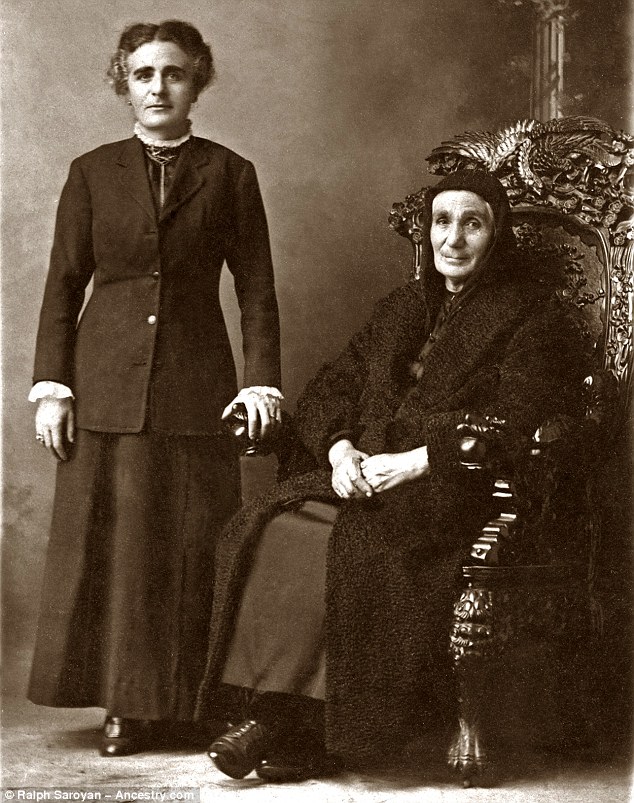 Slaughter: Many Armenians who refused to heed the warnings of impending war and revolution were killed 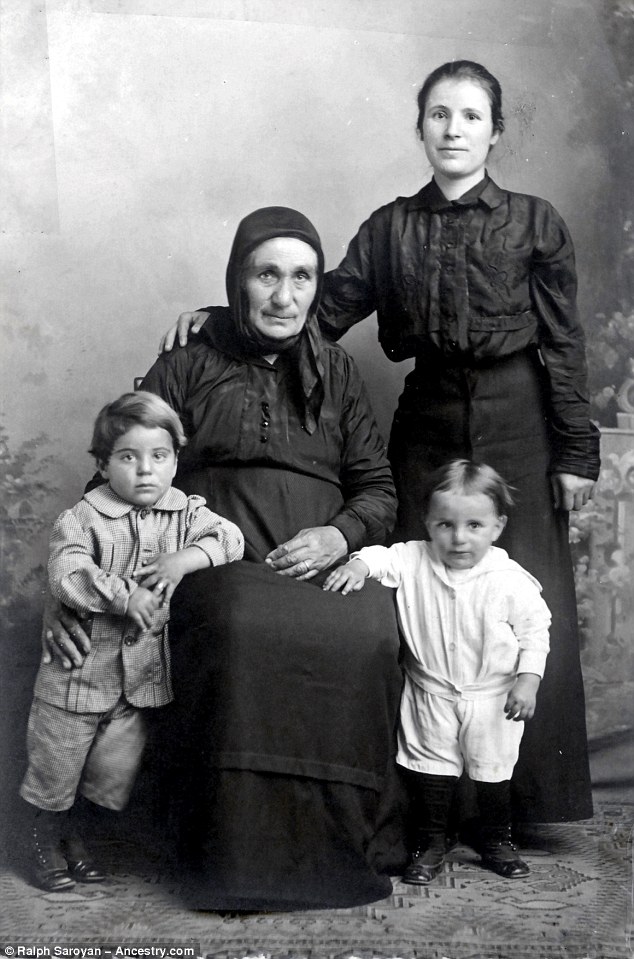 Flight: Luciag (pictured, centre) and Hovhannes wed in Erzurum, which is now in Turkey, in 1867 but escaped along with their daughter Vartanoosh Mironyan, born in 1886, in the early 20th century

The flight to freedom of Arthur’s parents and grandparents from the village of Karakale – today a snow-covered and entirely Muslim outpost in eastern Turkey where the stone ruins of the old Armenian homes still stand – came later than many in this community.

It was as if they had sought to cling on against the rising ethnic violence and persecution.

The Kardashians – or Kardaschoffs – like other branches of Kim’s paternal kith and kin were ethnic Armenian, but they were also religious rebels, at odds with the orthodox faith in their homeland.

They had already fled persecution once before, from another location deeper in Armenia.

‘The village bullies harassed and insulted them, dug into their tombs and (violated) the corpses of the deceased – hanging them on trees,’ explained Joyce Keosababian-Bivin, whose ancestors also came from Karalala, and whose family is linked by marriage to the Kardashians.

‘Because of that they wrote a letter of complaint to Nicholas II.’

The tsar decreed that they could move to Karakale, close to the Russian military settlement, where initially they were safe in what was ‘a modern village, with beautiful buildings and wide streets’.

Here, they became close to incoming Russian protestants against the Russian Orthodox Church.

They were a sect called the Molokans, literally translated as ‘milk-lovers’, so-called because they drank milk, and other banned foods, on fast days.

Some were known as Jumpers, who leapt in the air, raising their hands high, during church services. They were pacifists and, crucially, adhered to the power of prophecy. 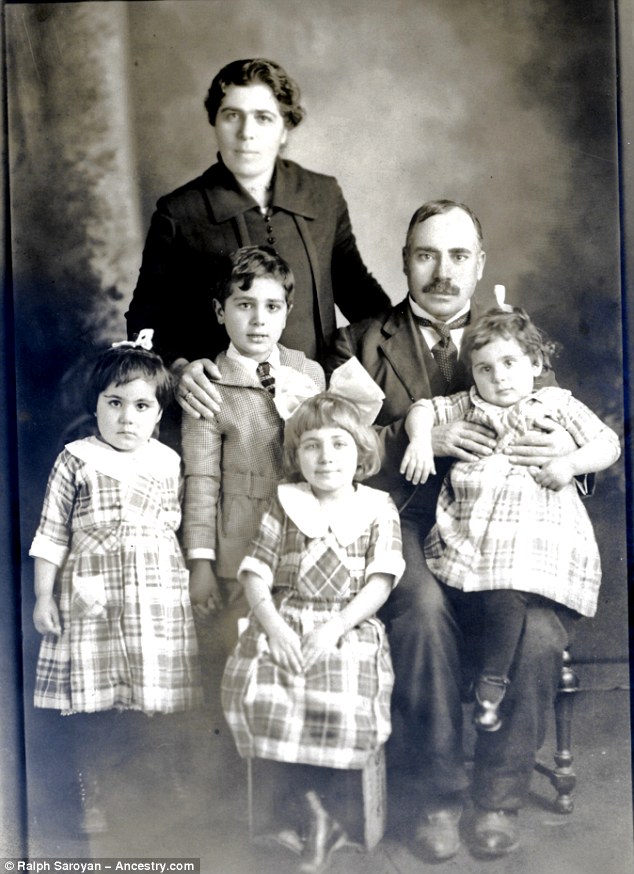 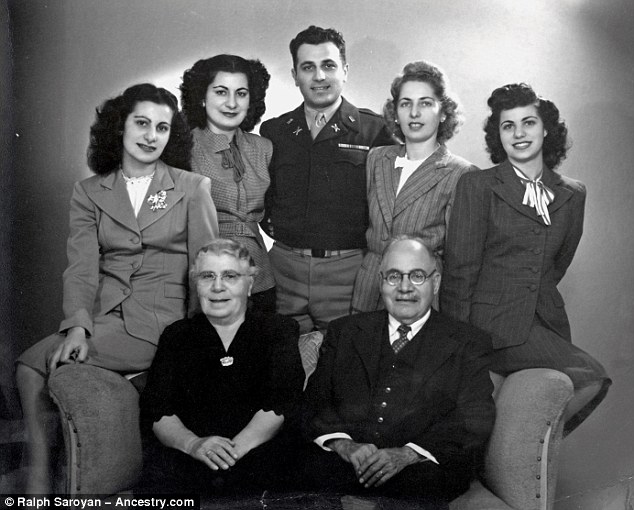 Destiny: By leaving their native Armenia, Vartanoosh (front, left), Arakel Arakelian (front, right) and their daughter Helen (second from right, back row) escaped the triple horror of the First World War from 1914-18, the ‘Armenian Genocide’ starting in 1915, exactly a century ago this year, and the Russian Revolution

The legend has it that in the 1850s, an 11-year-old Efil Klubnikin penned an apocalyptic forecast despite being apparently illiterate.

‘Those who believe in this will go on a journey to a far land, while the unbelievers will remain in place,’ the boy prophesied. ‘Our people will go on a long journey over the great and deep waters…people from all countries will go there.

‘There will be a great war. All kings will shed blood like great rivers. Two steamships will leave to cross the impassable ocean.’

In the first years of the 20th century, Efim renewed the warning that he made to stunned believers in Karakale as a child, saying his premonition was now coming to pass.

‘Efim called a meeting, he invited the elders from all the Molokan villages including the two elders of the Armenian Molokan church. He prophesied this was the time for them to leave Russia as there were terrible times coming, especially for the Armenians,’ said Ms Keosababian-Bivin.

Images he scrawled led locals to believe they should cross the Atlantic to the United States, but this young diviner also indicated they should not stop there, but trek to the west coast. He pointed them towards Los Angeles.