“Songs of Solomon,” written by Audrey Gevorkian and based on “The Past Unsung” by Sirvart Kavoukjian, explores the life of the composer Archbishop Solomon, also known as  Komitas, who had a profound impact on ethnomusicology. It centers on a childhood friendship, torn apart by the Hamidian massacres in the 1890s as a brave Turkish woman at a time of dire prejudice risks her own life and the life of her family to save her best friend, who is hunted down for her religious beliefs.  The film spans the period from 1881 to 1915, which marks both the Armenian Genocide and Komitas’ final concert.

The film, released on Nov. 26 in Armenia, is produced by Nick Vallelonga of Vallelonga Productions, Asko Akopyan of Oscar Gold Productions and Nshanian under his People of Ar Production Company in association with AnEva Productions in Armenia. Karo Kavoukjian serves as Executive Producer. Vallelonga won Academy Awards for best picture and and best original screenplay for 2018’s “Green Book.” “Songs of Solomon” will be opening in the U.S. in 2021.

In light of the September 2020 invasion of Armenian inhabited Nagorno- Karabakh at the hands of Azerbaijan and Turkish forces, the filmmakers hope that the film can be a cathartic experience for all Armenians and serve to educate others to prevent such atrocities from occurring again. 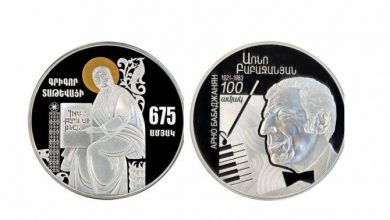