Welcoming the Russian Foreign Minister, Prime Minister Pashinyan said “the most important issue for us now is the situation in Nagorno Karabakh. We have to make decisions on many issues, the most important thing is the humanitarian side of the issue, we have to ensure the return of the people of Artsakh to their homes.”

Of course, he said, already now there is a rather good dynamic of the residents of Artsakh returning to their homes. And in fact the Russian peacekeepers have been deployed in all the designated places and are provide security.

“This is a very important factor that ensures the security of the people of Nagorno Karabakh. But there are issues that have not been resolved and remain open: how will we ensure the exercise of the right of return of the residents of several regions in the future, who will ensure the security of our compatriots, how will it be implemented? These, of course, are issues that are on our agenda. We must discuss and make decisions in that regard,” PM Pashinyan said.

Sergey Lavrov, in turn, thanked for the welcome and noted that the Russian delegation arrived in Yerevan within the framework of Nikol Pashinyan’s agreement with Russian President Vladimir Putin, Prime Minister Mikhail Mishustin, in order to fully address all areas of cooperation, the allied, strategic relations.

“The November 9 statement provides an opportunity to resolve issues in Nagorno Karabakh on the basis of agreements reached in a document signed by the three leaders. First of all, it refers to the return of refugees, the solution of all humanitarian issues of the current situation.,” Lavrov said.

He thanked PM Pashinyan for his appreciation of the role played by the Russian peacekeepers, which is important not only in terms of security as a key component of their mandate, but also in terms of ongoing support for the returning people  who need humanitarian assistance.

“And in addition to the role of peacekeepers, the interdepartmental center, which is being established by President Putin’s order, is already starting its work, and will also deal specifically with all these issues. We actively involve the international organizations of the UN system, we encourage them to use their opportunities in a more active, more proactive way for the people of that region. We actively support the International Committee of the Red Cross, which works, including in Karabakh,” the Russian Foreign Minister said. 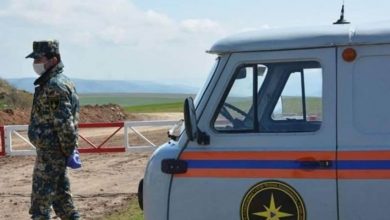