The Armenian National Committee of America – Western Region (ANCA-WR) Board of Directors met with the Human Rights Defenders of Armenia and Artsakh – Arman Tatoyan and Artak Beglaryan – who are visiting California to partake in the Armenian Bar Association’s 30th Anniversary Annual Meeting and Conference.

In addition to the ombudsmen, the delegation also included the Permanent Representative of Artsakh Republic to the U.S. and Canada Robert Avetisyan and the leadership of the Armenian Bar Association.

Welcoming the guests, ANCA-WR Chair Nora Hovsepian, Esq. talked about the work of the organization, its accomplishments, and future plans in advancing the Armenian Cause. 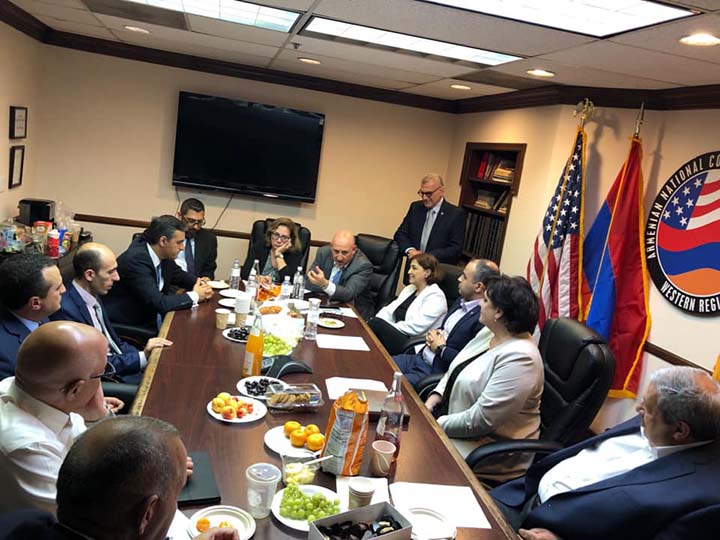 “Promotion and protection of human rights encompasses a significant part of our work,” remarked Hovsepian. “From pursuing truth and justice for the Armenian Genocide to defending Artsakh citizens’ inalienable right to independence and self-determination, the ANCA Western Region takes a 360 degree view in identifying and promoting our public policy priorities.”

Mr. Beglaryan and Mr. Tatoyan talked about their current priorities and ongoing projects, highlighting the need to continuously strengthen the protection of human rights and further develop civil society resiliency in both republics. The two ombudsmen also thanked the ANCA-WR for the active work in promoting relations between the United States and the two Armenian republics.

Last week representatives of the ANCA Western Region Board and Staff were present at the Armenian Bar’s Conference and Gala Banquet, celebrating the organization’s 30th anniversary and supporting its important activities.