On the occasion of the Armenian Genocide Centennial and the 40th anniversary of the start of the Lebanese Civil War, filmmaker and documentarian Ara Madzounian is releasing a book of original photographs that chronicles Bourj Hammoud, the Beirut suburb which became home for Armenian Genocide survivors.

Madzounian, who was born in Bourj Hammoud to parents who survived the Armenian Genocide, has been at the helm of scores of Armenian and non-Armenian multimedia projects around the world. His resume includes directing films, documentaries, producing popular music and telethons and performing theatrical productions.

After wrapping up his feature cinematography work on the feature film Meltdown, to be released in August, he is turning his focus on BIRD’S NEST, a published book of talking pictures and essays by a selected group of academicians, writers and artists.

“I wanted to create a lasting legacy about this place,” says Madzounian. “For more than 50 years, Bourj Hammoud served as the cultural, intellectual and political beacon for the Armenian Diaspora.”

BIRD’S NEST is the culmination of Madzounian’s laborious and emotion-provoking work to capture the soul and preserve the memories of his birthplace, one of the first post-Genocide communities to be established.

For generations, Bourj Hammoud was the safe harbor that allowed broken families to get on their feet again after one of the most tragic chapters in their history. In the safety of Lebanon, the community flourished before it abruptly found itself in the middle of their host nation’s civil war.

The survivors of the Armenian Genocide and their progeny were once again victimized when Lebanese brothers took up arms against one another. Many residents of the Armenian enclave of Bourj Hammoud were killed and injured; others were forced to leave their homes as they had during the Genocide.

“Ara’s photographs of the faces, the streets, the old buildings and the narrow alleyways of Bourj Hammoud recall to me all of the richness of the place, the personal histories and the grand narratives of the past hundred years,” says cultural anthropologist at the Kevorkian Center for Near Eastern Studies at New York University, Joanne Randa Nucho.

A Kickstarter campaign will launch on April 13, 2015, the 40th anniversary of the start of the Lebanese civil war that began in 1975 and continued until 1990. Crowdsourcing will fund the costs of publishing BIRD’S NEST, a book of photographs Nucho says capture “the ephemeral moments of life in this place.”

BIRD’S NEST is the product of Madzounian’s years of meticulous and insightful photography with the goal to capture the essence and historic importance of his own birthplace.

After leaving his nest, Madzounian earned a master’s degree in film at the University of California, Los Angeles. The filmmaker then spent years working on commercial and independent productions and directing and producing his own projects.

“These photographs are an amazing legacy to a vanishing pocket of Armenian culture,” says Oscar nominated director Atom Egoyan. “For those who have never visited Bourj Hammoud, the fabled Armenian neighborhood in Beirut, this collection will be overwhelming.” 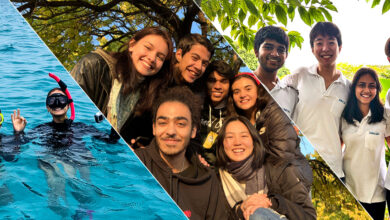