“Is an Armenian life no more valuable than a Jewish or Rwandan or Cambodian? As we approach the 100th anniversary this April, the United States still has time to set the record straight,” Stephan Pechdimaldji, a grandson to survivors of the Armenian Genocide and first generation Armenian-American, writes in an article published by the Huffington Post.

Just one week before he prepared to attack Poland in the summer of 1939 and embark on his quixotic campaign to take over the world, Adolf Hitler addressed his military commanders in Obersalzberg and referred to the Armenian Genocide by concluding his speech by saying, “Who, after all, speaks of the annihilation of the Armenians?” Hitler saw what happened nearly twenty-five years earlier and thought he could emulate what the Ottoman Turks did to ethnic Armenians living in Asia Minor and use it as a blueprint for his own sadistic ambitions without anyone noticing. Today we remember this dark period with somber and reverence, and honor those who suffered during the Nazi’s reign of terror. Since then the world has tried to bleach out this stain in history by learning from the past and vowing that this type of crime must never happen again. The healing process began with Germany taking responsibility for the actions of their predecessors and trying to make amends with the victims of the Holocaust and their families. Laws have even been codified that make it illegal to deny that the Holocaust ever happened. Watchdog organizations like the Anti-Defamation League were created to monitor anti-Semitism. But what if none of this happened? Imagine a world where governments didn’t recognize the Holocaust and called for an historical commission to study the facts surrounding the event to determine whether or not a crime had been committed? This type of world does in fact exist today for Armenian-Americans who continue to grapple with the United State’s refusal to recognize the Armenian Genocide and side with Turkey’s ongoing contention that genocide never took place.

The Armenian Genocide is an historical fact. To say otherwise is a lie. As the first genocide of the 20th century, more than 1.5 million Armenians were systematically killed through wholesale massacres and deportations carried out by the Turks during World War I and the last days of the Ottoman Empire. Eye-witness accounts including dispatches from Henry Morgenthau, American ambassador to the Ottoman Empire, photographs taken from German military media Armin T. Wegner and articles from the New York Times all chronicle the mass slaughter of Armenians during this period. Eerily similar to the Holocaust, Armenians were uprooted from their homes as part of a “relocation” effort to control the minority population. Instead, thousands were sent to their deaths by mass burnings, death marches in the Syrian Desert and primitive gas chambers where victims were forced into caves and asphyxiated in one fell swoop by the toxic airs lit from fires in front of the passage ways. Years later, Raphael Lemkin, a law professor responsible for coining the word genocide in 1943 did so with the fate of the Armenians in mind. Given this body of historical evidence, Turkey continues to deny any responsibility in orchestrating genocide. Turkey claims that the killings were not calculated and were an unfortunate result of war and that the deportations were justified because Armenians posed a threat due to their sympathetic feelings towards the Russians.

This issue is further complicated by Turkey’s ongoing campaign to pressure and influence U.S. foreign policy. Sensitive to not offend Turkey for geopolitical purposes, the U.S. has yet to hold Turkey responsible for these atrocities. For years, the U.S. claimed that it was not in our foreign interests to do so because Turkey was a NATO ally and strategically valuable due to its close proximity to the Soviet Union. When the Cold War ended, the argument turned to Turkey’s importance as a free and democratic society in a sea of Islamic fundamentalists. Countries like Yemen, Iraq and Iran could learn from Turkey’s example, the line of reasoning would go. This flies in the face of our core values. How can the leader of the free world, a champion of equality and universal civil liberties be complicit in such an egregious violation of basic human rights?

Sadly, this issue has become a political football in our country where politicians like President George W. Bush and Barack Obama looking for votes and money promise to recognize the Armenian Genocide and then bow to pressure once in office. Political expediency should play no role in this debate when the facts overwhelmingly support what many scholars and students of history recognize as the 20th century’s first genocide.

I grew up hearing stories of how my grandparents survived the Armenian Genocide. Of how my grandfather hid in a haystack for more than forty days while his father and brother were taken away, never to be seen or heard from again. Of his harrowing escape from the tiny village of Yozgat to Aleppo, Syria, where many survivors gathered and of how he worked as a welder to make enough money to eventually settle in Egypt. These stories had a profound impact on me and I could never fully comprehend what it must have been like to go through such a tumultuous ordeal. And as a child I remember going to Times Square every April 24th — the official day of remembrance — to commemorate the Armenian Genocide and listen to civic leaders and politicians excoriate Turkey and pledge recognition.

Since then, I’ve written countless letters to news publications on this topic and have urged friends, colleagues and even strangers to take up this cause. Some say why does this matter? How is the relevant to their daily lives or something that the government should get involved with? This is significant because denial is often the last phase of genocide. What’s more, the U.S. can send a message to despotic states like The Sudan that genocide on any grounds is unacceptable and any attempt to obfuscate responsibility will be met with staunch opposition. Much like the Holocaust, we owe recognition of the Armenian Genocide to the victims and their families as well as to the intrepid guardians of human rights both here and abroad.

While Turkey continues to uphold this policy of denial, there have been folks like Orhan Pamuk, a Turkish novelist and Nobel-prize winning author, who made statements regarding the Armenian Genocide who subsequently was charged with violating Article 301 of the Turkish penal code that prohibits and bans insulting Turkey. And then there’s Hrant Dink, an editor of a Turkish-Armenian newspaper whose life was cut short by an assassin’s bullet for his views on Turkey’s denial of the Armenian Genocide. These actions do not reflect a government that supports free speech and divergent points of view — all vital components of a democratic society. Distorting historical facts surrounding the Armenian Genocide is just another example of Turkish subterfuge in trying to burnish its image with the West.

Admitting past mistakes is not uncommon for the United States. In fact it’s in our blood. Apologizing for the mistreatment of African Americans for slavery and the internment of Japanese Americans into camps during World War II are just some examples. President Clinton even went so far to make amends for not doing enough to stop genocide in Rwanda in the mid 1990s. And time and again we see the U.S. condemn countries like Iran for denying the Holocaust, yet continue to turn a blind eye to the Armenian Genocide. Why are Armenians any different? Is an Armenian life no more valuable than a Jewish or Rwandan or Cambodian? As we approach the 100th anniversary this April, the United States still has time to set the record straight. Time will tell if they decide to be on the right or wrong side of history. 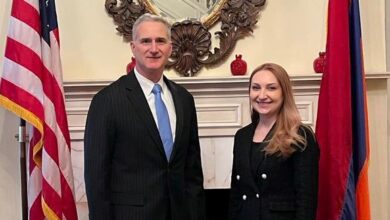 Rep. Schiff invites Artsakh’s Representative to the US to President Biden’s State of the Union address