In a formal motion adopted by the New South Wales Legislative Council the Armenian National Committee of Australia received the unanimous praise of the House for its ongoing and dedicated work.

The motion was moved the Hon. Marie Ficarra MLC as part of the formal business of the day.

Upon hearing of the motion, ANC Australia Executive Director Vache Kahramanian remarked: “This is a great surprise for the Armenian National Committee of Australia. We are deeply humbled and honoured for this recognition by New South Wales.”

This motion comes after the conclusion of the 2012 Advocacy Week which yielded significant results to the Armenian-Australian community.

Motion by the Hon. Marie Ficarraagreed:

1. That this House notes that:

(a) on 2 November 2012, the Armenian National Committee [ANC] of Australia held its fifth annual Banquet Dinner at Miramare Gardens in Terrey Hills, and

(b) the proceeds of this event go towards supporting the efforts of the Armenian-Australian community across the country.

2. That this House acknowledges that:

(i) ensure that the Armenian genocide is resolved and acknowledged in a truthful and just manner,

(ii) strengthen the social fabric of the Armenian Republic,

(iii) see the international and military security of Artsakh secured,

(b) the keynote speaker of this event was Turkish-born author Taner Akcam, and:

(i) Mr Akcam is an internationally renowned Turkish historian and sociologist,

(ii) Mr Akcam is one of the first Turkish academics to acknowledge the Armenian Genocide by the Ottoman Empire,

(iii) Mr Akcam is a notable advocate of reconciliation between Armenia and Turkey, specifically in regards to the issue of genocide,

(c) over 250 members of the Armenian community were present at the banquet dinner,

(e) the fifth Armenian National Committee Australia Annual Banquet raised over $75,000 in donations to aid the efforts of the Armenian-Australian community.

3. That this House congratulates the humanitarian efforts of the Armenian National Committee Australia and encourage their work into addressing the needs and concerns of the Australian-Armenian community in the future.

The issue of rights and security of the people of Artsakh should be comprehensively addressed, FM Mirzoyan tells OSCE 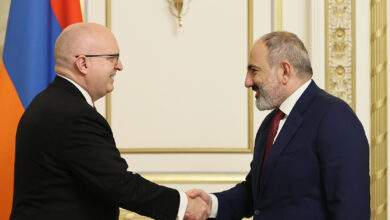